3. The electrical control adopts centralized control with manual and automatic operation modes. It is equipped with a control cabinet and a mobile operating handle, which can be switched freely during operation. When used outdoors, the control cabinet is equipped with a stainless steel Yuyang Pavilion, which is convenient for operation and maintenance; The control system is equipped with various limit protection switches, overpressure alarms, buzzer warnings, and other protection devices; the main electrical components are well-known brands of Schneider and China.

6. When the waste transfer station system is working, the box body is a closed structure, and the joint surface is equipped with a sealing rubber strip, which effectively prevents garbage and dust from overflowing. The feeding port has a spray pipe.

7. There is a maintenance window on the trash box, which is convenient for timely access to the box for maintenance when the equipment fails, and it is usually locked to prevent irrelevant personnel from entering the box.

8. The system has a built-in buzzer. When various actions are executed, the buzzer will sound and the indicator light will flash at the same time. When the pressure reaches a safe pressure value, the system will immediately automatically cut off the main motor power supply, the hydraulic system will relieve the pressure, and at the same time, it will issue a rapid sound and light alarm to remind the operator and the surrounding people to pay attention to safety; the outer wall of the box is sprayed with eye-catching warning marks and covered An international warning mark. 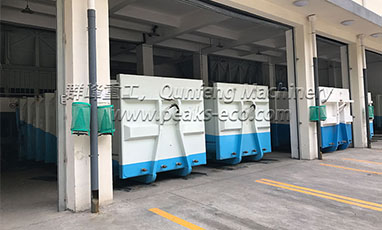 9. Others: Compared with products of similar manufacturers, our company's level station has the following characteristics:

1) There is a hydraulic automatic switch cover device, which reduces the labor intensity of workers and increases safety.

2) There is an anti-garbage revolving door opening mechanism to prevent the garbage from squeezing into the pit.

3) Equipped with a wireless remote control device, one person can operate the whole set of equipment when the garbage truck is docked.

4) Equipped with automatic circulation compression device, suitable for a large amount of garbage to be put in at the same time.

5) There is an automatic garbage blocking device to prevent the garbage from falling into the pit from the car.

6) Equipped with an electrical automatic control circuit, to prevent the occurrence of burning of the sewage pump.

The above features have been widely promoted and used, and have been unanimously affirmed by the environmental sanitation department.