At present, due to the rapid development of China's economy, and the high concentration of urbanization, the rapid growth of urban domestic waste brought urban managers by surprise. To quickly solve the current waste problem, China is vigorously promoting and encouraging waste incineration power generation technology. However, due to concerns about the discharge of pollutants such as dioxin, the support, and understanding of the people in some places are still not available, which has caused a series of social conflicts. Behind the vigorous promotion of the waste incineration project, what is really worrying is that, without sorting, recycling and selection, garbage cannot "turn waste into treasure". Under such circumstances, in what way should garbage disposal move towards benign development? China Automatic Waste Sorting Equipment 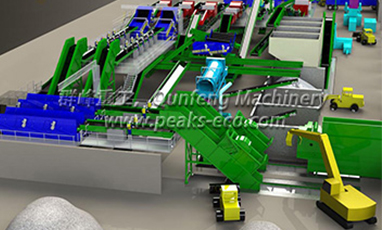 The Chinese sorting machine MSW manufacturer believes that the biggest problem faced by a domestic garbage disposal is the high moisture content of garbage. In some areas, garbage moisture content is even greater than 50%. The high moisture and low calorific value of domestic garbage are very incinerated difficult. Many waste incineration power plants leave garbage in the original garbage storage for a few days before incineration to remove some of the leachate (moisture) inside. In this process, they will naturally go through an anaerobic reaction process and emit more harmful gases. Increase the cost of leachate treatment. In addition, in order to increase the calorific value of waste incineration, waste incineration plants will be mixed with coal and burned together, which not only increases the cost, but also generates additional greenhouse gas emissions. Therefore, in order to increase the calorific value of garbage incineration, reduce costs, and reduce harmful gas emissions, the key is to dehydrate the garbage to dry.

Garbage drying is an important first step in the garbage disposal process. Sorting garbage after it is dried is called resource pretreatment before garbage incineration. Wet garbage cannot be used as a resource with market value, and can not separate inert substances, pollutants, and combustibles well; due to moisture, a large amount of organic matter makes the adhesion between garbage particles very strong, that is, using modern automated sorting The mechanical effect is not very ideal, and the equipment is seriously blocked.

Fully automated mechanical sorting is to sort out the electronic fragments, iron and non-ferrous metals in the dry garbage for recycling; and then separate the incombustible substances, that is, inert substances, such as glass, sand, stone, ceramics, etc. These inert substances Can be used for road construction. The remaining combustible materials, such as plastic, wood, paper, cardboard, cloth, and organic matter, can be made into RDF, that is, garbage-derived fuel, or solid recycled fuel. After the incombustibles are dried, the RDF/SRF has a high heating value and can be fully burned by itself without adding any auxiliary fuel.