The movable jaw has its maximum movement at the top of the crushing chamber, and minimum movement at the discharge point. The motion is, however, a more complex one than the Dodge motion, being the resultant of the circular motion of the eccentric shaft at the top of the swing jaw. combined with the rocking action of the inclined toggle plate at the bottom of this jaw. The motion at the receiving opening is elliptical; at the discharge opening, it is a thin crescent, whose chord is inclined upwardly toward the stationary jaw. Thus, at all points in the crushing chamber, the motion has both, vertical and horizontal, components. 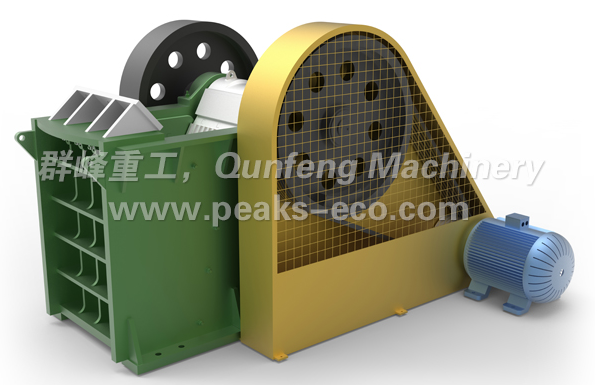 It will be noted that the motion is a “rocking” one. When the swing jaw is rising, it is opening, at the top, during the first half of the stroke, and closing during the second half, whereas the bottom of the jaw is closing during the entire up-stroke. A reversal of this motion occurs during the downstroke of the eccentric.

The horizontal component of motion (throw) at the discharge point of the single-toggle jaw crusher is greater than the throw of the Dodge crusher at that point; in fact, it is about three-fourths that of Blake machines of similar short-side receiving-opening dimensions. The combination of favorable crushing angle, and non-choking jaw plates, used in this machine, promotes a much freer action through the choke zone than that in the Dodge crusher. Capacities compare very favorably with comparable sizes of the Blake machine with non-choking plates, and permissible discharge settings are finer. A table of ratings is given.

The single-toggle type jaw crusher has been developed extensively. Because of its simplicity, lightweight, moderate cost, and good capacity, it has found quite a wide field of application in portable crushing rigs. It also fits into the small, single-stage mining operation much better than the slower Dodge type. Some years since this type was developed with very wide openings for reduction crushing applications, but it was not able to seriously challenge the gyratory in this field, especially when the high-speed modern versions of the latter type were introduced.

Due to the pronounced vertical components of motion in the single-toggle machine, it is obvious that a wiping action takes place during the closing strokes; either, the swing jaw must slip on the material, or the material must slip along the stationary jaw. It is inevitable that such action should result in accelerated wear of the jaw plates; consequently, the single-toggle crusher is not an economical machine for reducing highly abrasive, or very hard, tough rock. Moreover, the large motion at the receiving opening greatly accentuates shocks incidental to handling the latter class of material, and the full impact of these shocks must be absorbed by the bearings in the top of the swing jaw.

The single-toggle machine, like the Dodge type, is capable of making a high ratio-of-reduction, a faculty which enables it to perform a single-stage reduction of hand-loaded, mine run ore to a suitable ball mill, or rod mill, feed.

Within the limits of its capacity, and size of receiving openings, it is admirably suited for such operations. Small gravel plant operations are also suited to this type of crusher, although it should not be used where the gravel deposit contains extremely hard boulders. The crusher is easy to adjust, and, in common with most machines of the jaw type, is a simple crusher to maintain.

As rock particles are compressed between the inclined faces of the mantle and concaves there is a tendency for them to slip upward. Slippage occurs in all crushers, even in ideal conditions. Only the particle’s weight and the friction between it and the crusher surfaces counteract this tendency. In particular, very hard rock tends to slip upward rather than break. Choke feeding this kind of material can overload the motor, leaving no option but to regulate the feed. Smaller particles, which weigh less, and harder particles, which are more resistant to breakage, will tend to slip more. Anything that reduces friction, such as spray water or feed moisture, will promote slippage.

Leading is a technique for measuring the gap between fixed and moveable jaws. The procedure is performed while the crusher is running empty. A lead plug is lowered on a lanyard to the choke point, then removed and measured to find out how much thickness remains after the crusher has compressed it. This measures the closed side setting. The open side setting is equal to this measurement plus the throw of the mantle.

The minimum safe closed side setting depends on:

Qunfeng is a Jaw Crusher supplier. Please feel free to contact us if you need them!