The Significance of Garbage Classification

Because garbage is not classified, modern garbage contains chemical substances, and some will cause the incidence of people to increase. If you dispose of garbage by landfilling or stacking, even if you are away from the living place and landfill the garbage, and adopt the corresponding isolation technology, it is difficult to prevent the penetration of harmful substances, which will enter the entire ecosystem with the circulation of the earth , Pollution of water sources and land, through plants or animals, will ultimately affect people's health.

At present, there are two ways to dispose of garbage in our country, one is landfilling, and the other is garbage stacking. No matter what kind of garbage, the essence is to transport garbage from one place to another and still occupy land resources. For now, landfills are the simplest and most convenient way of disposal, but they are extremely unfavorable for future development. The land resources of a country are fixed, and the per capita land in China, especially the cultivated land per capita, is below the world average. Landfills are irrecoverable sites, that is, they cannot be used as living quarters again. If the land resources are turned into garbage disposal sites, it is equivalent to chronic suicide, and the cost of land restoration in the future will be very expensive.

The generation of garbage is because people do not make good use of resources, and discard the resources they do not use as garbage. This waste of resources is inestimable for the loss of the entire ecosystem. Once the garbage is disposed of by landfill or incineration It is extremely difficult to reuse it. Before the garbage treatment, the garbage can be turned into treasure through waste sorting and recycling, such as recycling paper can protect the forest and reduce the waste of forest resources; recycling biological waste such as peel vegetables can be used as a green fertilizer to make the land more fertile. 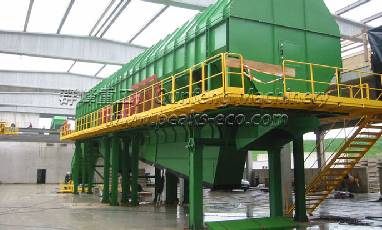 The waste sorting system is the best solution and the best way to deal with waste pollution. Carrying out garbage classification has become an inevitable path for a country's development. Garbage classification can make people learn to save resources, use resources, develop good living habits, and improve their personal quality. If a person can develop good waste sorting habits, then he will also pay attention to environmental protection issues, pay attention to the preciousness of resources in life, and develop the habit of saving resources.

Garbage Sorting Equipment Manufacturer China believes: Garbage sorting is a project that benefits modern times and is beneficial to the future. Garbage sorting can protect precious land resources, reduce environmental pollution, and build a green and environmentally friendly social environment. Only when people develop the habit of sorting garbage, and realize the importance of saving resources in life, can they continuously improve their self-cultivation and start from themselves to contribute to environmental protection. In addition, garbage classification can also promote economic growth. Through continuous technical research on garbage recycling, garbage can be turned into waste.

The hazards of urban garbage are mainly manifested in:

4. Occupy a lot of lands

In addition, waste disposal also consumes a lot of capital. However, a considerable part of the garbage is recyclable resources. About one-third of the materials in domestic garbage in our country, such as waste paper, waste glass, waste plastics, and waste metal, can be reused. If we consider the organic matter in the garbage to make farmhouse fertilizer, the available ratio will be higher. However, the general urban disposal method is simple, and the value of renewable resources thrown away in the garbage every year is as high as 25 billion yuan.

What is the significance of the garbage sorting machine.

At present, most of the garbage disposal methods are still in the traditional landfilling method, occupying tens of thousands of acres of land; and the flies fly, the sewage overflows, and the smelly air smokes, seriously polluting the environment. Therefore, garbage classification and collection can reduce the amount of garbage disposal and treatment equipment, reduce the treatment cost, reduce the consumption of land resources, and have social, economic, and ecological benefits.

1. Reducing land occupation: Some substances in domestic garbage are not easily degraded, and the land is severely eroded. Garbage classification, remove recyclable and non-degradable substances, reduce the amount of garbage by more than 50%.

2. Reduce environmental pollution: Waste batteries contain toxic substances such as metallic mercury and cadmium, which will cause serious harm to humans; waste plastics in the soil will cause crops to reduce production; discarded waste materials are eaten by animals by mistake and cause animal death Accidents happen from time to time. Therefore, recycling may reduce harm.

3. Turn waste into treasure: China uses 3 billion plastic fast food boxes each year, 500-600 million instant noodle bowls, and waste plastic accounts for 3-7% of domestic garbage. One ton of waste plastic can reclaim 600 kg of unleaded gasoline and diesel. Recycling 1500 tons of waste paper can avoid the felling of forest trees used to produce 1200 tons of paper. A ton of cans can be melted into a ton of good aluminum after melting, and 20 tons of aluminum ore can be mined. 30%-40% of the production waste can be recycled, and this small and profitable resource should be cherished.