What Is Biogas Energy?

What Is Biogas Energy?

Biogas is produced through a process called anaerobic digestion (AD), which results in the production of large amounts of gas, which can then be burned to produce energy. Anaerobic digestion is the process by which bacteria break down various plant and animal materials (called biomass) in the absence of oxygen. For example, a waste plant is sealed in an airtight container and then bacteria are added to encourage bacteria to multiply and grow, releasing methane and other gases as by-products of the process. In addition, other by-products are produced during the process, which is rich in nutrients and can be used as fertilizer. The inputs to the process can be any amount of biomass material, including any of the following: food waste, energy crops, crop residues, mud, and fertilizer. In practice, the process can absorb waste from homes, supermarkets, and industry, thus reducing the amount of waste in landfills.

The two main gases that makeup biogas are methane (CH4), which accounts for about 60-70% of the total, and carbon dioxide (CO2), which accounts for about 30-40%. Small amounts of other gases can be found. In general, the composition of biogas depends on the inputs or feedstock entering the AD process. In industry, biogas can be enhanced to filter out pure methane and remove other gases, and then become biomethane.

Biogas is a biofuel produced naturally by the decomposition of organic matter. When the organics are exposed to an oxygen-free environment, they give off a mixture of gases. Although the largest releases are methane (between 50 and 75 percent, depending on the number of carbohydrates present in the mixture) and carbon dioxide, smaller amounts of other gases are also released.

The process is also called anaerobic digestion because methane is produced in the absence of oxygen. In short, there is a fermentation process that breaks down organic matter, turning what was once waste into energy that, once burned, can be used for heating, cooling, cooking, or conventional power generation.

Is biogas good or bad?

Biogas is an excellent source of clean energy, meaning that it has a lower impact on the environment than fossil fuels. While not having a zero impact on the ecosystems, biogas is carbon-neutral. That’s because biogas is produced from plant matter, which has previously fixed carbon from carbon dioxide in the atmosphere. A balance between the carbon released from biogas and the amount absorbed from the atmosphere is maintained.

A rich surplus product that can be used as fertilizer.

Biogas is made from animal and plant waste that would otherwise end up in landfills. 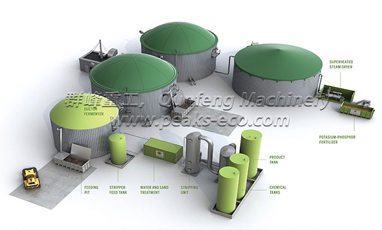 Biogas (from biogas) is the fuel that powers CNG or LNG vehicles and emits fewer greenhouse gases.

Purifying biogas by removing CO2 and trace gases and turning it into biogas can be used as an alternative for home consumption.

Biogas (and also biomass) is often referred to as a CO2 neutral energy source that simply recycles CO2 from the biosphere. This happens because the CO2 released during the biogas burning phase is the same as the biomass absorbed during photosynthesis, which gives rise to organic matter.