01 The necessity of garbage incineration

As human beings continue to use natural resources to create a material civilization, a large amount of garbage is also generated.

According to the prediction of the United Nations Environment Program, with the development of the world economy, the global middle-class population will rise substantially. By 2025, the amount of global urban waste will increase from the current annual 1.3 billion tons to 2.2 billion tons. In this situation, we cannot be limited to the passive “defense” methods of landfilling and composting, but should actively take effective measures to carry out comprehensive and scientific treatment of garbage. Waste incineration power generation is the current ideal choice.

As a widely adopted urban domestic waste treatment method in developed countries, the incineration system complies with the three principles of "harmlessness, reduction, and recycling".

Reduction: After the waste is incinerated, the general volume can be reduced by more than 90% and the weight by more than 80%. Landfilling after garbage incineration can effectively reduce the occupation of land resources.

Harmless: After high-temperature incineration, it can eliminate a large number of harmful bacteria and toxic substances in the garbage, and can effectively control secondary pollution.

Large amounts of household waste are burned in the open air and spontaneous combustion of landfills emits dioxin into the atmosphere, which is several thousand times that of the same amount of waste discharged by modern incineration. Research from Germany shows that when garbage is transported to an incineration plant, the dioxin unit content has reached 50 ng. After domestic waste is incinerated, the original dioxin in the garbage is decomposed, and the dioxin discharged into the air is equivalent to 1% of the original content.

Recycling: The thermal energy generated after garbage incineration can be used for power generation and heating to achieve the comprehensive utilization of resources. Waste-to-energy can not only turn waste into treasure, produce electrical energy, but also save coal resources.

Environmental equipment factory is to collect all kinds of waste and sort it. Among them: First, high-temperature incineration (completely eliminating pathogenic organisms and corrosive organic matter) with high combustion value, the heat energy generated during high-temperature incineration (the generated smoke is treated) is converted into high-temperature steam, and the turbine is rotated Make the generator produce electrical energy. The second is the fermentation, anaerobic treatment of the incombustible organic matter, and finally drying and desulfurization to produce a gas called methane (biogas), which is then converted into steam by combustion, which drives the turbine to rotate and drives the generator to generate electrical energy.

The garbage goes through three stages of drying, burning, and burning, and the garbage is fully burned at a high temperature of 850-1100 degrees. Through the DCS automatic control system and automatic combustion control system, the combustion conditions of garbage in the furnace can be monitored and adjusted in real-time, and the operating speed of the grate and the amount of combustion air can be adjusted in time. The burning flame and the high-temperature flue gas generated by garbage incineration generate high-temperature steam through a natural circulation boiler, which provides a steam source for the steam turbine generator set. 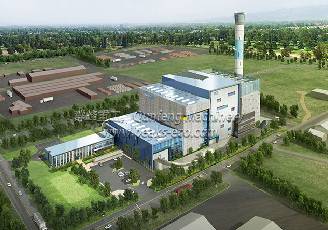