The Harm Of Garbage Is Far Away From You?

The word "garbage" is not unfamiliar to us, so what exactly is garbage? Garbage is solid waste generated in human daily life and production. For example, the peels, plastic bags, and food waste generated during cooking are thrown away every day. Because garbage is closely related to everyone's life, garbage pollution always affects human health, and air pollution is often ignored by everyone because of its complexity. The editor here focuses on the dangers of air pollution from garbage.

The impact of air pollution from garbage on the human body mainly has the following points. The first is that the body feels unwell, then the physiologically reversible reaction occurs, and then the acute hazard symptoms appear. The harm of air pollution to people can be roughly divided into three types: acute poisoning, chronic poisoning and carcinogenesis.

When the concentration of air pollutants is low in the air, it usually does not cause acute human poisoning, but under certain special conditions, such as a special accident in the production process of the factory, a large amount of harmful gases leaked out, and external weather conditions change suddenly, Will cause acute poisoning. For example, the leakage of methyl isocyanate at the Indian Pabor Pesticide Factory directly endangered the human body, and a tragic incident that killed 2,500 people and injured more than 100,000 people.

Air pollution has a chronic toxic effect on human health, mainly manifested in the phenomenon of increased prevalence of pollutants at low concentrations and long-term continuous action on the human body. Specifically, the overall incidence of lung cancer in Chinese urban residents is relatively high.

This is the result of long-term effects of air pollution, which is caused by pollutants that affect the body for a long time, damage the genetic material in the body, and cause mutations. Long-term severe air pollution will lead to a decline in human life.

In the third season of "Running", the running men's group visited the only landfill in Hangzhou-Tianziling Landfill. The sight was full of mountains of garbage. In fact, there are such landfills in any city. No matter which method is the "last word" after waste production, the cost of harmless treatment of waste is very high. If the generation of garbage can be reduced from the source, environmental pollution can be greatly reduced. Waste disposal is a global homework, and every country is responsible for the waste it produces.

Every citizen should produce as little garbage as possible and contribute to a clean environment. Of course, the generation of garbage is inevitable. When we generate garbage, what should we do to minimize the harm to the environment? Then we have to mention waste sorting equipment china. We may be confused by the intricate garbage classification. The waste sorting machine is very important. Now let's talk about the garbage classification. 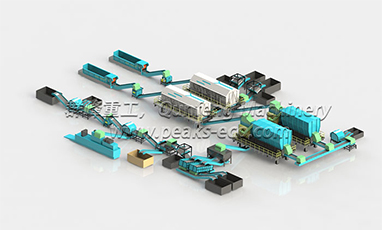 There are five types of garbage

Including leftovers, bones, root vegetables, peels and other food waste.

In addition to the above categories, it is difficult to recycle waste such as tile ceramics, muck, toilet paper, paper towels, dust, and food bags (boxes).