As we all know, world cities should be cities with important influence in the world. This influence is reflected in many aspects, but the level of garbage classification rate should undoubtedly be one of them. It’s hard to imagine how a city with a very low waste classification rate can assume the honor of being a world city. The current waste classification rate in Beijing is only about 10%. Most of the waste is landfilled because it cannot be classified. Waste has also caused environmental pollution, and a large amount of valuable land has become a landfill that can no longer be used. These very distressing results are caused by the fact that the garbage has not been sorted from the source. Therefore, to properly handle the garbage and find ways to increase the garbage classification rate requires functional departments to improve measures, and thousands of households need to start from the source. This is to save resources and protect the environment. Need is also a standard that cities in the world should have. 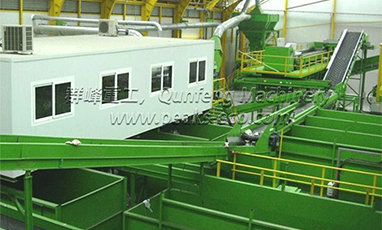 Humans produce a large amount of garbage every day, and garbage that is not sorted, recycled, reused, and disposed of will cause environmental pollution. Garbage sorting equipment is high-tech equipment that automatically sorts mixed garbage. Waste sorting equipment can carry out a subsequent comprehensive treatment and full reuse of waste, and achieve the goal of zero waste landfill. Whether it is mixed-collected municipal domestic waste, kitchen waste, or stale waste, the equipment can automatically, quickly, and effectively separate the plastic, paper, organic matter, batteries, packaging, and other physical components in the waste for the purpose of downloading One-step recycling.

The municipal waste sorting system changes the cumbersome pre-treatment process of traditional waste sorting, saves a lot of manual sorting costs and equipment investment, and achieves the maximum utilization of waste resources and the goal of zero landfills.