The Vertical Waste Compression Station China integrates the unloading (discharging), compression, and storage of garbage. It adopts a structure that integrates compression and storage. The whole looks like a large box, which is produced by compressing garbage. The sewage flows directly into the sewage well through the sewage pipe and then is discharged into the urban sewage pipe network. The entire equipment only needs a position the size of a parking space, which is highly maneuverable and can be moved at any time. It is a new concept of urban domestic waste collection equipment that meets the national requirements for domestic waste treatment. Its main features are small area, easy to move, and no pollution to the surrounding environment.

1. Save clearing and transportation costs. The volume of the garbage compressed by the compressor is reduced by about 70, and the water in the domestic garbage can be discharged at the same time, which can carry more garbage, increase the garbage carrying capacity of a bicycle, and reduce the number of transportation. This alone can save money every year. Ten thousand yuan.

2. Operation integration. The intelligent operation and control system is controlled by a microcomputer processor, which can realize the automatic rotation of the cabinet, automatic compression cycle of locking, and full load warning, emergency stop, forced retreat, and safety warning functions. As long as the sanitation workers press the corresponding switch, the garbage compressor can complete multiple processes such as compression, lifting, and loading. The maximum compression force of the cylinder can reach 140t. Electric centralized control is adopted to improve the efficiency of the garbage disposal and reduce the labor intensity of workers. 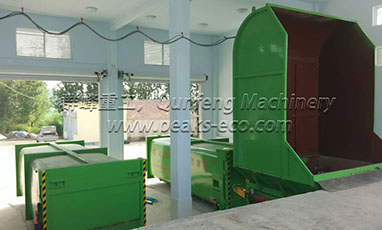 3. Conducive to the clean transportation of garbage. The rubbish block compressed by the compressor will not cause the secondary pollution phenomenon of rubbish falling off and flying and sewage dripping during transportation, which is beneficial to the health of urban sanitation and sanitation workers.

4. Because the garbage compression equipment adopts a fully enclosed environment-friendly form placed underground, the box cover is insulated with professional thermal insulation materials. In summer, the temperature in the box is lower than the ground surface, the garbage is not perishable, the sewage will not flow out, and the odor is difficult to emit. It reduces the breeding of mosquitoes and flies and secondary pollution to the environment. At the same time, it eliminates the pollution and the spread of germs caused by garbage pickers or animals turning over. Garbage is stored in the box, free from wind and rain erosion, and flying scattered so that the surrounding environment is well protected.

5. Easy to use and operate. Both household or office bagged garbage and trolley transported garbage can be easily put into the bin from the feeding port on the top of the bin. The garbage disposal in the bin is automatically completed by the PLC programming and controlling the electrical system and the hydraulic system. There is a dedicated maintenance port on the top of the box, which is convenient for maintenance personnel to repair the equipment.

6. It has high working efficiency and has a garbage compression function. When the garbage is compressed, it can discharge about 20% of the total amount of garbage, reducing the weight of transportation and the secondary pollution of sewage leakage during transportation. At the same time, vehicle efficiency is increased by about 50%. The garbage in the box is pushed to the garbage truck through the push plate, and it can be completed by only one or two people operating the controller. There is no need to get on and off the truck manually, which prevents the sanitation personnel from directly contacting the garbage and effectively reduces the labor intensity. At the same time, no garbage is scattered, which completely changes the secondary pollution caused by traditional garbage transportation.