The hydraulic baling machine gradually loses its original performance during use or idle, or the performance is poor compared with similar new equipment, and the phenomenon of the old style is called equipment degradation.

1. The degradation of hydraulic metal baler can be divided into use degradation, natural degradation and disaster degradation. Use degradation refers to the damage and deformation caused by wear and corrosion caused by wear and corrosion, impact, fatigue, and panning during the use of the equipment, the adhesion of raw materials and the pollution of dust and other phenomena, causing the equipment to lose its original Performance. Natural deterioration refers to the phenomenon of aging of materials with the passage of time or by the influence of the atmosphere after the equipment enters the factory, or suffering from external disasters and accelerating the speed of this aging. Disaster deterioration refers to the phenomenon that equipment is damaged or equipment performance is reduced due to natural disasters such as storms, flooding, earthquakes, lightning strikes, and explosions. 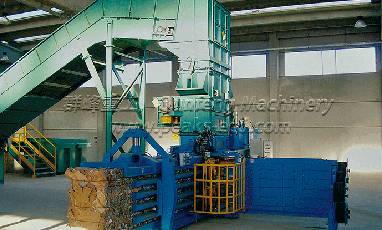 3. There are two compensation methods for equipment degradation: one is to replace the old equipment that has been deteriorated or worn out with new equipment, that is, to update the equipment; the second is to perform local compensation through maintenance during the use process. Because the service life of equipment parts is uneven, it is of great economic significance to use a repair method to compensate locally.