The Meaning Of Biogas Plant

Environmental equipment supplier share with you: with the continuous development of urbanization, the living standards of residents are also improving. How to deal with these wastes has also become an urgent problem to be solved. The common household waste treatment methods include composting, incineration and landfill, etc. However, these methods not only cover a large area but also cause great harm to the ecological environment. Biogas power generation is a relatively clean and environmentally friendly way. But the biogas plant one-time investment is opposite bigger, early problems such as resources, equipment and material inputs also makes people have to pay attention to the economic benefits of biogas power generation waste, we project the basic methods of economic analysis, and to a concrete analysis of the economic benefits of living garbage biogas power generation project. 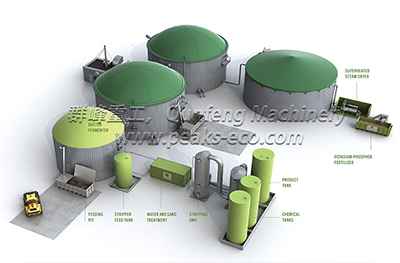 With the energy and resource crisis approaching. People pay more and more attention to the development and utilization of clean energy. And biogas is a very cheap and easily accessible new source of energy.The pollution of its combustion products is very small.In recent years, domestic waste biogas power generation projects have also received attention.According to statistics, a large amount of household garbage is produced in urban and rural areas every year.These domestic wastes have the characteristics of high water content, easy degradation and large production volume. Due to special engineering treatment characteristics and physical and chemical characteristics, the traditional treatment methods, such as composting, incineration and burial, can cause serious environmental pollution problems such as odor and high concentration osmosis.With the development of urbanization and the country's attention to environmental protection.Biogas has also become the latest technology.It is an effective way to utilize renewable energy to realize biogas power generation through anaerobic fermentation and filtration treatment, so as to realize the efficient utilization mode of resources and energy of urban and rural household waste.

It is often seen that in marshes, in sewers, or in tanks of dung, there are bubbles coming out, and if we strike a match, we can light it. This is naturally occurring methane.Since this gas was first found in swamps, it is called methane.

Biogas power generation has been widely valued and actively promoted in developed countries.Grid-connected biomass power accounts for about 10% of energy in some western European countries.

Biogas power generation has been widely valued and actively promoted in developed countries, such as energy farms in the United States, the promulgation of renewable energy promotion law in Germany, sunshine project in Japan, green energy in the Netherlands and so on.

In some western European countries, such as Germany, Denmark, Austria, Finland, France and Sweden, the proportion of biomass power generation connected to the grid is about 10% and is increasing.

Ruled out and deal with the biological waste for waste treatment industry is a serious challenge. For agriculture, food industry and feed processing of all kinds of organic matter in anaerobic fermentation is a kind of high value of utilization way. This kind of practice and to compost organic matter is different, methane as a mixture of methane and carbon dioxide, Produced by the anaerobic digestion system, can be high energy and renewable fuel to replace fossil fuels. By the biogas utilization in gas internal combustion engine, It can not only safely remove methane, but also achieve effective and environmentally friendly energy conversion.