Points earned for accurately classifying rubbish for collection can be exchanged for rewards including toilet paper and seasoning boxes in capital’s pilot scheme.

Beijing has found a novel way to incentivise its residents to sort their household rubbish, by awarding them points to exchange for prizes, as part of a national push to reduce China’s mountains of waste, it has been reported.

Residents in the Xicheng district of the capital were told that kitchen waste and other rubbish sorted accurately for collection from their homes would be rewarded with points, The Beijing News reported on Thursday.

Gangs busted for smuggling over 5,000 tonnes of garbage into China

Households could also reserve a collection of recyclables such as newspapers that could be sold to waste disposal plants for processing and incineration at a higher price than general rubbish.

Points earned could be exchanged for small prizes such as toilet paper, seasoning boxes and summer mats, the report said.

We believe our garbage sorting equipment will be very popular in every city. Looking forward to your visit! 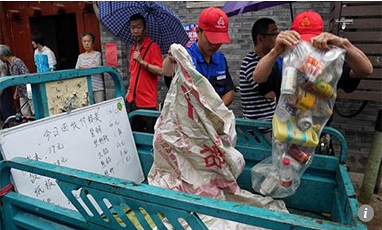