The cost of processing Beijing's waste could have been cut by 64 per cent to 1.53 billion yuan (US$240 million) in 2015 if waste sorting had been in place, it stated.

The aim of the latest of China's waste to energy initiatives is for dozens of cities – also including major hubs such as Shanghai, Tianjin and Chongqing – to carry out sorting for all household rubbish by 2020, according to the State Council.

Tens of thousands of volunteers have also been recruited to help the efforts.

China's largest municipal producer of rubbish, the capital is included in the first phase of the national plan to promote waste recycle.

Addressing its mounting waste problem also follows research suggesting that its landfill sites will be unable to accommodate more rubbish in a few years' time.

A 2017 report from Renmin University in Beijing found that processing urban waste in Beijing, by incineration, produced emissions of dioxin, which have been linked to cancer, but that classifying rubbish properly could reduce the risk of cancer by 25 per cent, state broadcaster CGTN reported. 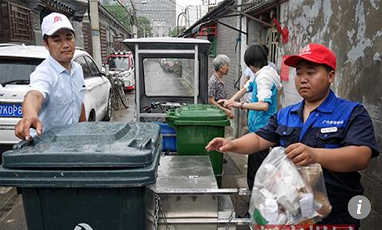