Urban domestic waste refers to solid waste generated by urban residents in daily life or activities that provide services for urban daily life. With the rapid development of the economy and the continuous acceleration of urbanization construction, the number of cities is increasing and the scale is expanding, resulting in an increase in the production of urban domestic waste year by year.

Recycling sorting equipment supplier believes that the huge amount of urban waste has become an increasingly serious threat to the city and the surrounding ecological environment. The problem of urban waste has become one of the most serious public hazards in the world today. Thousands of tons of garbage are piled around the city, which brings a very serious pollution hazard. In some cities, it has hindered the process of urban construction and restricted local economic development. 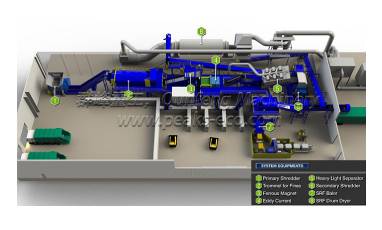 The waste sorting plant china supplier believes that urban domestic waste has become a major environmental problem facing major cities in the world. If not resolved as soon as possible, it will seriously threaten the living environment and the economic and social potential of urban residents. Continue to develop. The general view abroad is that garbage is a misplaced "resource". When disposing of garbage, start from the source, implement garbage collection and separate management of different types of garbage. Their goal is to achieve a future-oriented, sustainable development of a circular economy. Their policy focus is firstly on resource protection, and secondly, to deal with waste as efficiently as possible.

The International Energy Agency (IEA) has specifically turned garbage into energy as one of its development goals. In the course of the development of waste disposal technology in the past century, foreign countries have basically formed a technical model based on three traditional processes of landfill, incineration and composting. At the same time, with the development of anaerobic digestion technology and biomass gasification technology, emerging technology models such as anaerobic fermentation and garbage gasification have also emerged abroad.

(1) Landfill method: The earliest in the United Kingdom was in 1930, and the United States began using the design and development of municipal solid waste compression baler in 1940. The method of landfill disposal is to dump garbage in a selected place, fill it to a certain thickness, and use a machine to crush it and cover it with a layer of soil. The landfill method is the earliest traditional method. The landfill technology is relatively mature, with large processing capacity and low cost. It is one of the main processing methods today. From uncontrolled landfill to hygienic landfill, including leaching cycle landfill, compressed waste landfill, broken waste landfill, etc. The landfill treatment method should first prevent the contamination of groundwater by liquid squeezed from the waste and rainwater runoff. Secondly, the landfill should be equipped with exhaust vents, so that methane and other gases released during the decomposition of anaerobic microorganisms can escape in time to avoid explosions. However, the landfill method requires a lot of land resources, and in the future waste disposal methods, the application of the landfill method will be less and less.