A method of recycling useful components from garbage

A method of recycling useful components from garbage

Garbage sorting system manufacturer shares that the waste treatment and utilization process is to maximize the recycling of useful components, and only destroy (or convert into new products) a relatively small amount of waste. The methods that can be used to recycle the useful components of garbage are well known on the basis of wood, that is, gravity method, flotation method, magnetic separation method, electrostatic separation method and so on are used when the selection is rough. Which method to use depends on the properties of the separated components. For waste disposal process, the physical characteristics of components are very important, among which the main characteristics are density, sedimentation, magnetization, conductivity and so on.

In the method of garbage separation in the recycling sorting system, using water as separation medium fishing is "mud removal", using air is "thousand method". Waste disposal is more useful in a dry way. The advantages of 1000 method are: no water, no waste water, and waste water purification, discharge is not only laborious, but also a lot of costs, will not produce a strong odor, paper fiber pollution is less, better properties, separated waste paper long distance transport costs are low and the use of containing method separation, but also need to be dry. The basic method of recycling waste paper, at the same time the waste into weight two components is air separation. 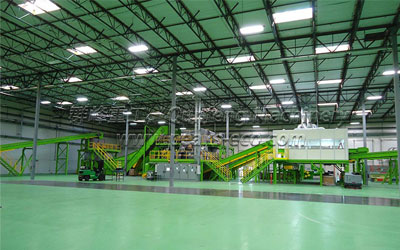 Ferrous metals are strongly magnetic substances which can be recovered by magnetic separation. The non - ferrous metal recycling USES electric separation method. And plastic thin touch and waste paper to use electrostatic separation method. All kinds of garbage enrichment methods adopt air as the separation medium blood, which is called "yu method". Banal waste disposal equipment small series of introduction from the waste of food, field impurities, to use the basin force method, although the need for water, but not much. After the useful components are recovered, the residue can be pyrolyzed or incinerated.